We are still open, offering zero contact work where possible! Following government guidelines to maintain the safety of our customers and staff! Start your free online conservatory quote today!

“Terry and his team worked very well together and were really hard workers with attention to the details. Base was completed and checked before conservatory order confirmed, ensuring a perfect fit. He also called the day before installation to make sure the delivery was correct. There had been torrential rain the day before they started, so boards were brought to protect the surrounding grass and flowerbeds. They also cleared and tidied at the end of each day and had an obvious pride in their work. Highly Recommended. Thank you.”

“Work carried out to repair a conservatory roof which was leaking. Roof panel removed, everything cleaned up and then panel replaced and sealed. No longer leaks and it rained heavily the day the work was done do very happy that it’s now water tight again! Would highly recommend Terry.”

“We were delighted to find Terry, he was friendly helpful and did exactly what he said he would do at the time said.”

“Excellent service, arrived on time and were extremely professional. Very happy with the quality of work, and I would not hesitate to recommend the company.”

Old conservatory moved and a completely new one fitted.

“I am really pleased with the new conservatory, which is very light and airy. Terry advised on the most appropriate design and offered alternatives, but at no point did I feel pressured into taking his advice. Any suggestions I had were respected. Terry was very reliable and in constant touch throughout, and any queries I had were responded to extremely quickly. Since completion of the work he has asked me to contact him if I have any concerns at all and I find that very reassuring.”

“Very professional in his attitude and attention to detail.”

Just had a glass roof put on my conservatory by tj conservatory. The team arrived on time, worked straight through. No mess left and the roof looks amazing. Very pleased with it.

We are very pleased with our new windows and conservatory. We always try to use a local firm and Terry Jones quotation for the work was very competitive. Terry is very knowledgeable and advised us on the best specification for both frames and glazed units that would be best for our house. All work was carried out with minimal disturbance and on completion everything was left clean and tidy. If you are looking for a reliable local firm for any double glazing or conservatory work, T J Conservatory Solutions are highly recommended.

Very professional, good communication from Terry and great job on repairing my conservatory roof as well as giving some good advice.

Have had extensive repairs to my conservatory completed by TJ Conservatories over two days and the end result is amazing. The workmanship is to a very high standard and the glass and overall finish is stunning. Terry and his team were very tidy and professional throughout. Incredible job, thank you Terry!

Terry and his team replaced existing windows and roof on conservatory style extension. Terry visited within a few days of our phone call to give an estimate and we did not have a long wait before the work was carried out. We were very impressed by the speed and efficiency with which the work was carried out and by the standard of the workmanship. Would definitely recommend.

We found Terry’s business online when we were looking for quotes to repair our old timber lean-to conservatory, which was leaking badly, as we thought it would be good to get a local supplier to quote as well. He came up with the best price and the most convincing explanation of what was going to be required. He was flexible and helpful, and didn’t just recommend knocking it down and starting again, and he took our suggestions seriously. We needed a chippy to do some preliminary repair work to the beams and elsewhere, so he put us in contact with a good carpenter and then, when the time came to put back the new roof, he and his colleagues were here for two days and did a great job. We now have a very useful, and dry, extra bit of living space available to us again. Very happy to recommend and give the thumbs-up!

Wanted to replace our conservatory roof but were amazed at the ridiculous quotes we got from major firms. A local tradesman recommended Terry and we got a very competitive quote without the usual hassle associated with this type of job. The work was commissioned and we are really pleased with the end product. Terry was true to his word at all stages of the job and worked efficiently and tidily.

We have used Terry several times now to do various repairs, this includes replacing glass in the lounge window and the glass in our bathroom to make it feel warmer. He also did a conservatory roof repair as we could not afford a new roof. Terry also installed a new set of French doors in the lounge and lots of people have commented on how good they look.
Also recently had new hinges on bathroom window and we’ve had him back to sort our side door out as the lock was broken. Terry is reliable and carries out all work to a high standard and I would not hesitate to recommend him.

Terry Jones was recommended by a well-known conservatory company in Hereford … He repaired my roof by replacing the sagging plastic strips on the end of each roof panel with aluminium ones that now look fantastic ….replaced parts of my guttering … Replaced all the small windows and adjusted the doors so that I could open them without having to lift them …replaced the strips on the windowsills inside the conservatory … I would highly recommend Terry Jones his work was exceptional …. Worth every penny, thank you Terry I now love my conservatory once again.

As detailed on Which? local discussions we had a leaking conservatory glass roof virtually since the conservatory was fitted in 2001, the installation company, various builders and Which? recommended conservatory companies have been invited to quote for repair, the builder repair helped but was only temporary, ultimately the person who appeared most knowledgeable got the job and we are stunned by the job that was done for a very competitive price compared to other recommended or trusted companies.

We had Mr Jones fit our double glazed windows, and was very happy with the end result, he left it all clean and tidy and i would recommend him to anyone.

T.J was recommended to us by another professional window fitter. T.J and his team were everything you could ask for, Punctual, efficient, worked well as a team, but most important, gave a very competitive price and provided an excellent quality of work. Job well done. Would recommend anytime. 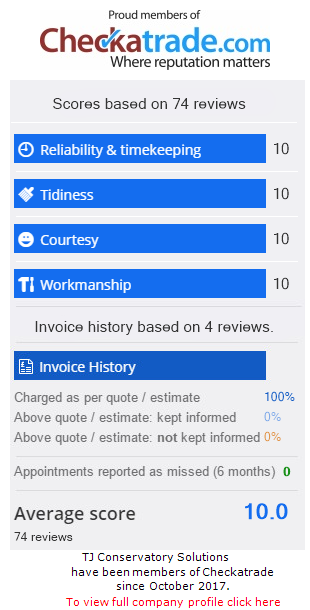 For professional conservatory fitting in Malvern and throughout Worcestershire contact us today!